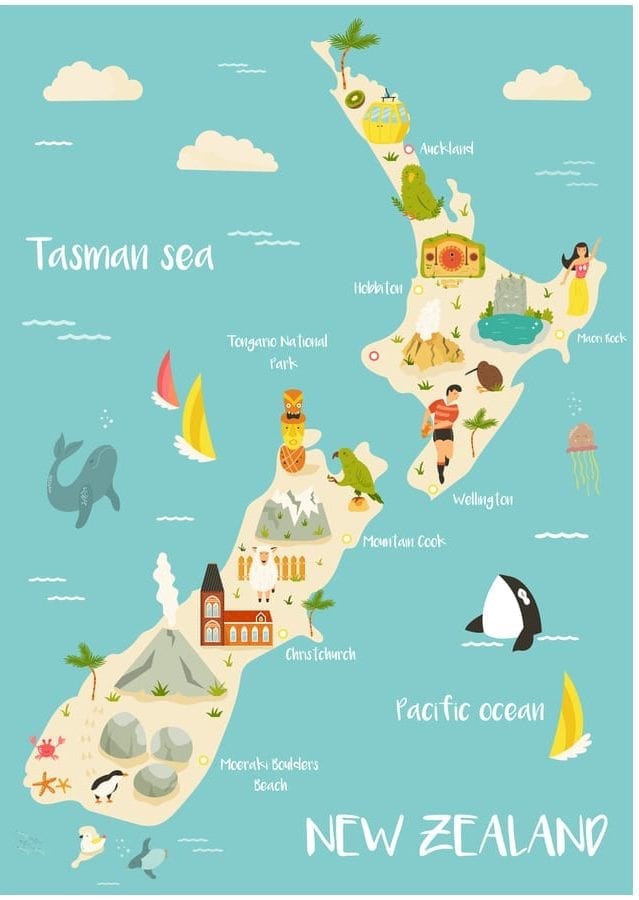 Exciting Facts: What do you know about New Zealand?

New Zealand is a remote, mountainous group of islands in the southeastern Pacific Ocean. The two main islands, North and South Islands, are separated by the Cook Strait. So, Australia, its nearest neighbor, is 1,000 miles (1,600 kilometers) away.

The islands were created just 23 million years ago when the land was thrust out of the ocean by volcanic forces. Let me remind you that New Zealand has more than 50 volcanoes, some of which are still active today. Sharp snowy peaks, rocky shores, and pastures create a majestic landscape.

The South Island is home to the highest mountain peak in New Zealand, Mount Cook, which rises to 12,316 feet (3,754 meters) and it is called “Cloud Piercer” by the Maori people.

New Zealanders, or “Kiwis” as they are called, have been shaped by their isolation. Today, most Kiwis are no longer farmers, with 86 percent of the population living in cities. Suffice to say that more people live in the city of Auckland on North Island than the whole population of South Island.

The Maori named the country, Aotearoa, “The Land of the Long White Cloud.” It’s no wonder that the Maori culture is widely respected by New Zealanders and many parcels of land under dispute were returned to the Maori in 1998.

Rugby is the favorite sport and nearly everyone cheers on the national team, the All Blacks. Many Kiwis also enjoy cricket.

Because of its remote location, New Zealand is rich in unusual wildlife not seen anywhere else in the world. Nearly all the land animals are birds and many of these species have lost the ability to fly. Most likely, the Maori people and European settlers introduced animals to the islands and the flightless birds had no defense against them.

In the last 1,000 years, half of all animals on the islands have become extinct. Deforestation and draining of swampland are also threatening many remaining species, including the kiwi bird. Fewer than 75,000 wild kiwis remain although several species are recovering, including the kakapo, the kokako, the kiwi, and the tuatara.

Bats are the only land mammals to have made the ocean crossing. Birds and insects, such as the weta, evolved to fill the gap of mammals on the islands. What’s really curious is that the giant weta, at 2.5 ounces (70 grams), weighs three times more than a mouse. It is a relative of crickets and it is considered one of the world’s heaviest insects.

Also, pilot and humpback whales visit the islands on their way to breed, and orcas come to feed on dolphins.

Exciting Facts What do you know about New Zealand? Government and Economy

New Zealand’s government is based on the parliamentary democracy, also based on the system used in Britain. There are 122 seats in the House of Representatives and each is elected for a three-year term. Seven seats are reserved for the Maori and these are chosen by Maori voters.

There are two main parties, National and Labour. The party with the most elected representatives forms the government and the leader of the party is the Prime Minister.

As far as New Zealand’s economy, tourism is certainly the main industry, with over two million visitors a year. Above all, the main exports are lamb, butter, kiwifruit, and wine.

According to historians, the Maori people arrived by canoe from islands in Polynesia near Tahiti around 1,000 A.D. Many years later, in the 1600s, the Dutch explorer Abel Tasman visited the islands, but his party left after being attacked. So New Zealand was named Nieuw Zeeland after a region in the Netherlands.

A century and a half later, in 1769, Captain James Cook came to the islands. Many years later, the British established settlements and signed a treaty with the Maori in 1840. The Maori protested the treaty after their lands were seized, and in the 1860s, they began a 12-year war against the British for control of North Island. Peace was restored to the islands in the 1870s.

In 1893, New Zealand became the first country to give women the right to vote. The country became a dominion of Britain in 1907 and finally gained its independence from Britain in 1947.