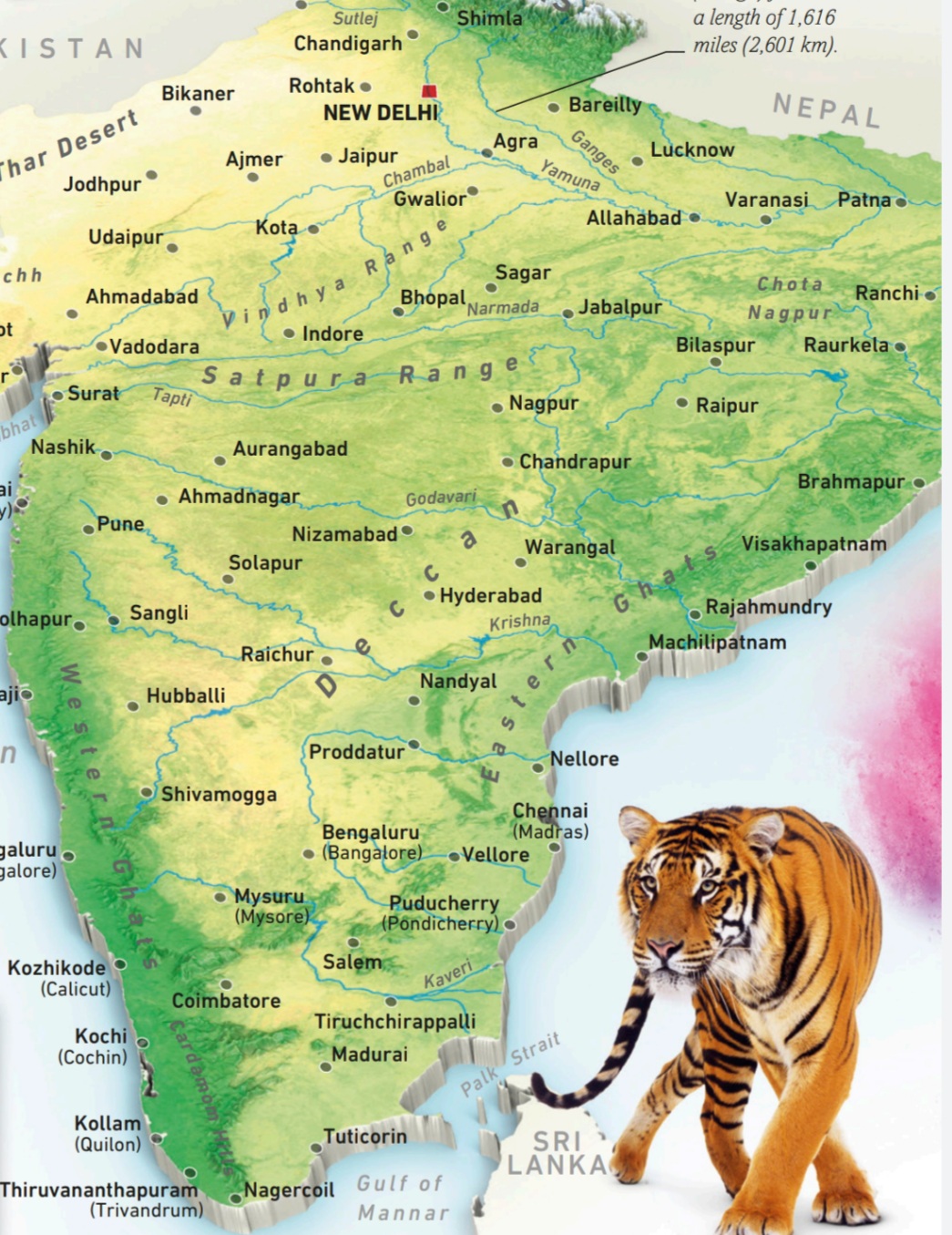 Exciting Facts: What do you know about India?

Hello to everybody! Want to know some exciting facts about India? Home to more than one billion people, India ranges from the Himalayas in the north, to fertile rivers and coastal plains in the south. A rich variety of cultures, faiths and languages makes India one of the most diverse nations on Earth. Actually, what do you know about India? Listen and discover all the amazing and interesting things India has to offer with these exciting facts.

India’s terrain varies widely, from the Thar Desert in the west to jungles in the northeast. A fertile area called the Ganges Plain covers much of northern India. This formation was created from soil that was deposited by rivers running from the Himalaya. In some places, this layer of silt is over 25,000 feet deep (that is, 7,620 meters deep).

For thousands of years, since the Hindu religion first evolved, respect for animal life has been an important part of Indians’ beliefs. Cows in particular are sacred and cannot be harmed. They can even wander through city streets, which often causes traffic jams!

India’s varied climate zones support about 65,000 animal species, including elephants, pythons, river dolphins, and rhinos, and 12,000 types of flowering plants. It is the only country in the world with both lions and tigers. On top of that, it’s also a bird watcher’s paradise.

On the coast of the Bay of Bengal is the Sundarbans, the world’s largest mangrove forest. Here, tigers swim in the same rivers as dolphins, sea turtles, sharks, and saltwater crocodiles. This unique landscape is constantly under threat as sea levels rise and humans hunt illegally and clear trees for firewood.

The Himalaya mountains provide a home for some of India’s rarest animals and plants. For instance, the most elusive animal is the snow leopard. Also, bears and black buck live lower down, and in the northeast, the tiger and one-horned rhinoceros can be found.

India’s parliamentary government was inherited from the British. After independence in 1947, one party, the Congress Party, and one family, the Nehru family, dominated politics in India for decades. Now, many parties compete for elected positions.

India’s economy is growing so fast that experts predict it will soon become one of the world’s leading markets. Indians are hard workers, and though many are poorly educated, there are many others who are highly trained college graduates.

India is a very spiritual country. Although it has no official religion, more than 80 percent of Indians are Hindu and about 13 percent are Muslim. Other religions include Buddhism, Sikhism, and Jainism, which all began in India.

India’s earliest known civilization arose about 5,000 years ago on the Indus River in what is now Pakistan. Archaeologists uncovered the remains of two huge cities with brick houses, piped water, and sewer systems. Nobody knows why, but people abandoned these cities, called Harappa and Mohenjo Daro, in 1700 B.C.

The Aryan people were farmers from Central Asia who arrived in India around 1500 B.C. They spoke Sanskrit, one of the world’s oldest known languages. The Vedic Scriptures, writings that form the basis of the Hindu religion, were written during the Aryan reign.

In the 200-year reign of the Gupta Empire, starting in the fourth century A.D., arts, crafts, and sciences flourished. During this time, the Indian astronomer Aryabhatta determined that the Earth revolved around the sun. This was long before the Western world accepted the theory.

Beginning in the 16th century, following a series of invasions by Muslim forces, a Mongol leader named Babur founded the Mongol Empire, which oversaw a golden age of art, literature, and architecture in India between 1527 and 1707. They built roads, mosques, gardens, and enormous tombs, including the grand Taj Mahal.

In the late 1400s, Europeans arrived in India and began setting up trading companies. After that, in 1757, Britain gained control over most of the country. Uprisings against British rule began in 1856. In 1920, the famous Mahatma Gandhi began nonviolent protests to push the British out. Finally, in 1947, India had independence.

Gautam Buddha (563-483 BC) – Gautan Buddha is the founder of Buddhism. So, during his life, people considered him a spiritual teacher.

Mohandas Ghandi (1869-1948) – Mohandas Ghandi led a nationalist movement in India that supported independence from British rule. He was also called Mahatma, which is a title of honour. Ghandi supported non-violent forms of protest.

Rudyard Kipling (1865-1936) – Rudyard Kipling is an English author who spent his some of his life as a child and young adult in India. As a result, his time in India and the culture there inspired much of his writing. He is most known for his Just So Stories and The Jungle Book.

Some of India’s top tourist attractions: