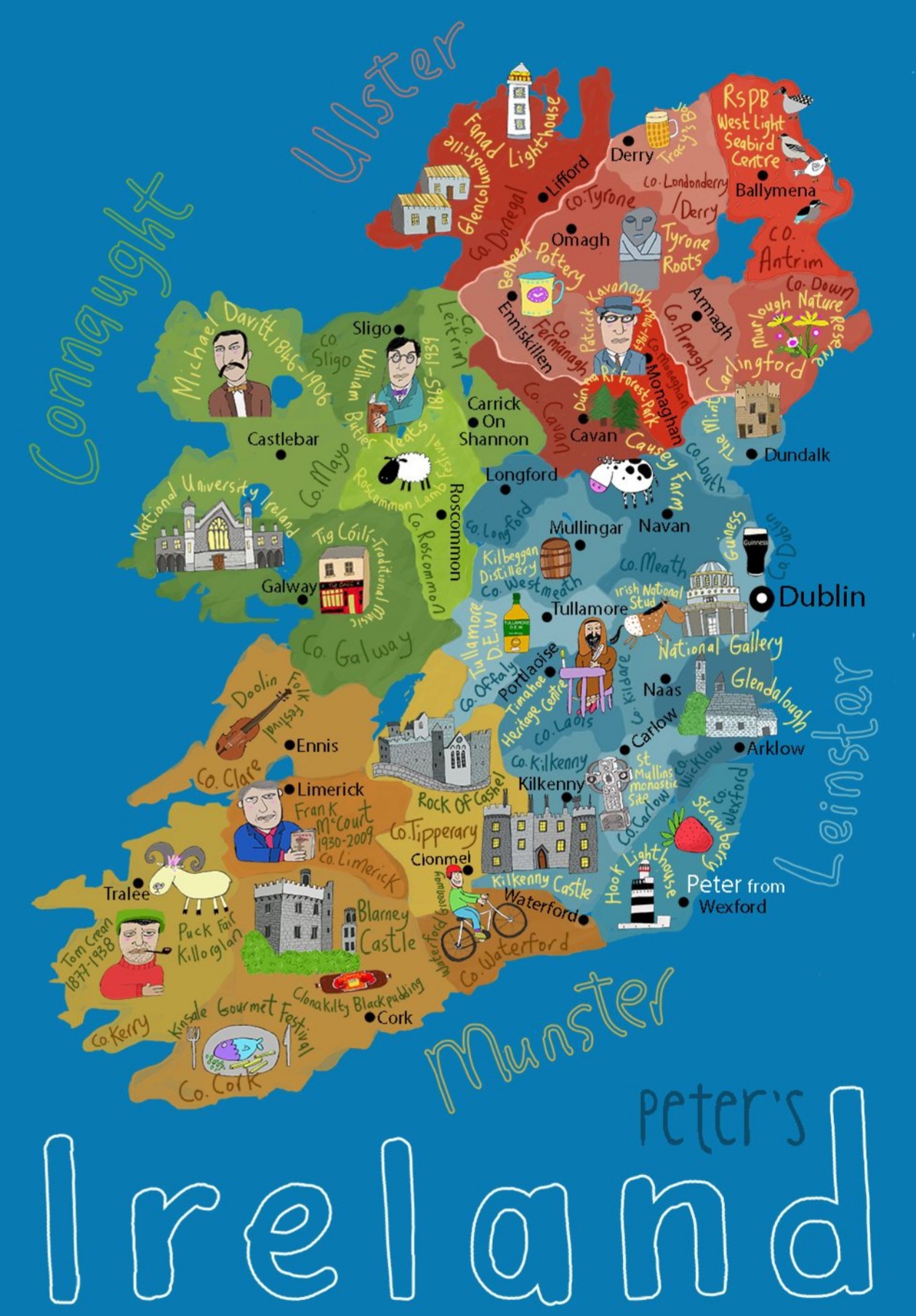 Exciting Facts: What do you know about Ireland?

Hi guys! Want to know some exciting facts about Ireland? There are over 4.8 million people living in Ireland today and the Irish people love to sing, dance, tell stories and enjoy a Guinness or two! With its wide expanses of lush, green fields, it’s clear to see why Ireland’s nickname is the Emerald Isle! Actually, what do you know about Ireland? Discover all the amazing and interesting things Ireland has to offer with these exciting facts.

Ireland is an island nation on the westernmost edge of Europe. It is the continent’s second largest island (after Great Britain). The Republic of Ireland occupies 80 percent of this landmass, while a large chunk of land in the north, called Northern Ireland, is part of the United Kingdom. All together, the island of Ireland is made up of 32 counties.

Ireland is known for its wide expanses of lush, green fields – so much so, that its nickname is the Emerald Isle. But there are also large areas of rugged, rocky landscape, too. About 15,000 years ago, Ireland was completely covered by thick glaciers. The movement of these giant sheets of ice stripped the soil, leaving huge tracts of flat, limestone ground.

The midlands and west coast of Ireland are dotted with damp peat bogs, the soggy remains of dried-up ancient lakes left by the glaciers. Above all, Ireland’s highlands rise mainly in the southwest, often ending at sheer cliffs that plunge thousands of feet into the Atlantic Ocean.

The Irish have a great affection for nature and rural life. So, for example, the country’s first coins even featured pictures of animals. Low levels of development and pollution in Ireland have left most of the nation’s open spaces relatively undisturbed.

Did you know that there are no wild snakes in Ireland? The sea has stopped many animals common on mainland Europe from reaching the island. There are also only two wild mouse species (the wood mouse and house mouse), one type of lizard (the common lizard) and just three kinds of amphibians (the natterjack toad, smooth newt and common frog).

Irish wildlife is protected by government conservation programs. To preserve natural habitat, the government has established six national parks and hundreds of national heritage areas throughout the country. Great news!

Archaeologists think the first people to settle in Ireland arrived around 6000 B.C. By 3500 B.C., settlers were using stone tools to clear farmlands. Around 700 B.C., a diverse and technologically advanced culture from central Europe, called the Celts, began to settle on the island. They would thrive there for nearly 2,000 years.

In the ninth century A.D., Viking invaders began raids into Ireland. They eventually established settlements that later became some of the country’s main cities, including the capital, Dublin. These aggressive arrivals fought with the Celts often for 200 years until a battle in 1014, known as the Battle of Clontarf, united the country. Peace broke down quickly though and Ireland was divided into many kingdoms.

In 1170, Norman Vikings who had taken control of England invaded Ireland and made it an English territory. In the early 1600s, England’s official religion became Protestant, while most Irish remained Roman Catholic. This would create tensions that would eventually lead to revolution and Ireland’s independence.

By the 1820s, British laws unfair to Catholics had sparked a mass movement for Irish sovereignty. In 1829, many of those laws were overturned, but Ireland still wanted freedom. After violent uprisings, in 1922, the Irish Free State was created within the British Empire.

In 1948, most of Ireland became an independent country, while six mainly Protestant counties in the northeast remained a British territory.

Ireland is a nation of storytellers. The tradition dates back to Celtic bards, who would record and recite the country’s history. For instance, many famed writers come from Ireland, including four winners of the Nobel Prize for literature. The Irish also excel in sports, music and dancing!

The government of Ireland consists of an elected parliament, which makes the laws, and a president, who is head of state. The head of the government is the Taoiseach (pronounced tee-shuck), which means “chief.” The Taoiseach is the prime minister, and leader of the political party with the most parliament members.

For most of its history, Ireland’s economy has been based on farming and agriculture. But beginning in the late 1950s, government efforts to attract business turned the country from one of Europe’s poorest nations to its second wealthiest. However, the amazing turnaround and economic boom in the mid 1990s and early 2000s earned Ireland the nickname the “Celtic Tiger.”

During the global financial crisis of 2008, Ireland entered a recession, and for that reason the country experienced serious financial problems. But in the past few years Ireland’s economy has started to recover and is once again on the rise.

Hope you take a keen interest in this wonderful country and its breathtaking natural beauties, as well as its people and culture! Go on learning about other great countries, England, the United States, Canada and about history!