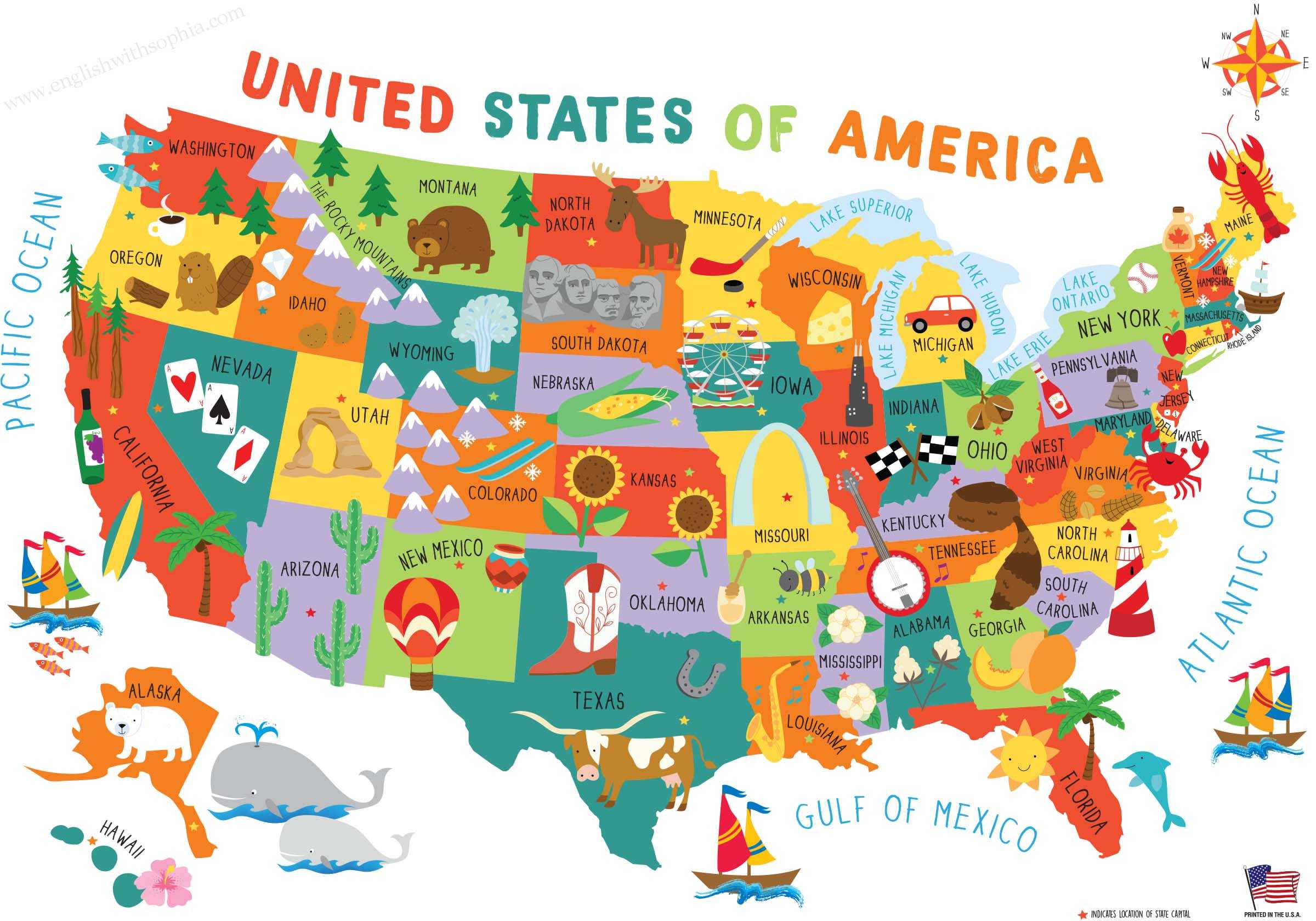 Hi guys! Want to know some exciting facts about the USA? This vast country is famous across the world and has a cultural imprint that is driven by technological innovation, popular movies, television, and music. Actually, what do you know about the United States of America? Discover all the amazing and interesting things America has to offer with these exciting facts.

The United States of America is the world’s third-largest country in size, nearly the third largest in terms of population. Located in North America, the country is bordered on the west by the Pacific Ocean and to the east by the Atlantic Ocean. Along the northern border is Canada and the southern border is Mexico. There are 50 states and the District of Columbia.

More than twice the size of the European Union, the United States has high mountains in the West and a vast central plain. The lowest point in the country is in Death Valley which is at -282 feet (-86 meters) and the highest peak is Denali (Mt. McKinley) at 20,320 feet (6,198 meters).

Throughout its history, the United States has definitely been a nation of immigrants. Without a doubt, the population is diverse with people from all over the world seeking refuge and a better way of life.

The country is divided into six regions: New England, the mid-Atlantic, the South, the Midwest, the Southwest, and the West.

First of all, European settlers came to New England in search of religious freedom. These states are Connecticut, Massachusetts, New Hampshire, Rhode Island, and Vermont.

Secondly, the mid-Atlantic region includes Delaware, Maryland, New Jersey, New York, Pennsylvania, and the city of Washington, D.C. These industrial areas attracted millions of European immigrants and, as well as that, they gave rise to some of the East Coast’s largest cities: New York, Baltimore, and Philadelphia.

Fourth, the Midwest is home to the country’s agricultural base and people call it the “nation’s breadbasket.” The region comprises the states of Illinois, Indiana, Iowa, Kansas, Michigan, Minnesota, Missouri, Nebraska, North Dakota, Ohio, South Dakota, and Wisconsin.

Fifthly, the Southwest is a beautiful stark landscape of prairie and desert. The states of Arizona, New Mexico, Oklahoma, and Texas are considered the Southwest. They are home to some of the world’s great natural marvels, including the Grand Canyon and Carlsbad Caverns.

Last but not least, the American West, home of rolling plains and the cowboy, is a symbol of the pioneering spirit of the United States. The West is diverse, ranging from endless wilderness to barren desert, coral reefs to Arctic tundra, Hollywood to Yellowstone. The states of the West include Alaska, Colorado, California, Hawai, Idaho, Montana, Nevada, Oregon, Utah, Washington, and Wyoming.

The landscape varies across the large country from tropical beaches in Florida to peaks in the Rocky Mountains, from rolling prairie lands and barren deserts in the West to dense wilderness areas in the Northeast and Northwest. Interspersed throughout are the Great Lakes, the Grand Canyon, the majestic Yosemite Valley, and the mighty Mississippi River.

The wildlife is as diverse as the landscape. For example, mammals such as bison once roamed freely across the plains, but now live only in preserves. Black bears, grizzlies, and polar bears are the largest carnivores. On the other hand, there are over 20,000 flower species and most came from Europe. There are more than 400 areas protected and maintained by the National Park Service, and many other parks in each state.

Moreover, the bald eagle is the national bird and symbol of the United States and is a protected species.

Citizens over 18 vote to elect the President and Vice President of the United States every four years. Therefore, the president lives in the White House in the capital city of Washington, D.C.

There are two houses of Congress: the Senate and the House of Representatives. Two senators come from each of the 50 states and they serve a six-year term. In other words, there are 435 representatives elected every two years.

The Supreme Court is made up of nine justices picked by the president and must be approved by Congress.

Undoubtedly, advances in the past hundred years have established America as a world leader economically, militarily, and technologically. America has the largest coal reserves in the world.

Hope you take a keen interest in this wonderful country and its breathtaking natural beauties, as well as its people and culture! Go on learning about the Use of English and about passing your First Certificate Exam with flying colors!