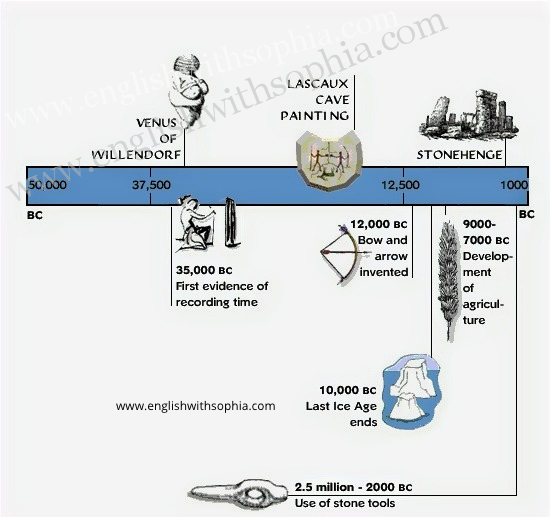 Here you are a timeline to keep record of the main artistic representations that developed during the Paleolithic and Neolithic, being one of the most impressive of them Lascaux Caves in France and Altamira Caves in Spain.

It is not known why these paintings were made. They may have had a function for rituals. They may also have been a way to transit information; to tell other people about something. Most paintings are in caves that are difficult to get at.

Today, there are about 350 caves known which have paintings in them. Many are in France and Spain. The best known are probably the caves of Altamira (in Spain), Lascaux (in France), or Creswell Crags in England. Sometimes, paintings were also done on cliff faces. Fewer of those have survived though, because of erosion. One such example is the rock painting of Astuvansalmi (in Finland).

Most often, animals or hunting scenes were painted. Sometimes hands are there too. Rarely, there are also more abstract patterns.

The paintings were drawn with red and yellow ochre, hematite, manganese oxide, and charcoal. Sometimes the silhouette of the animal was put into the rock first.