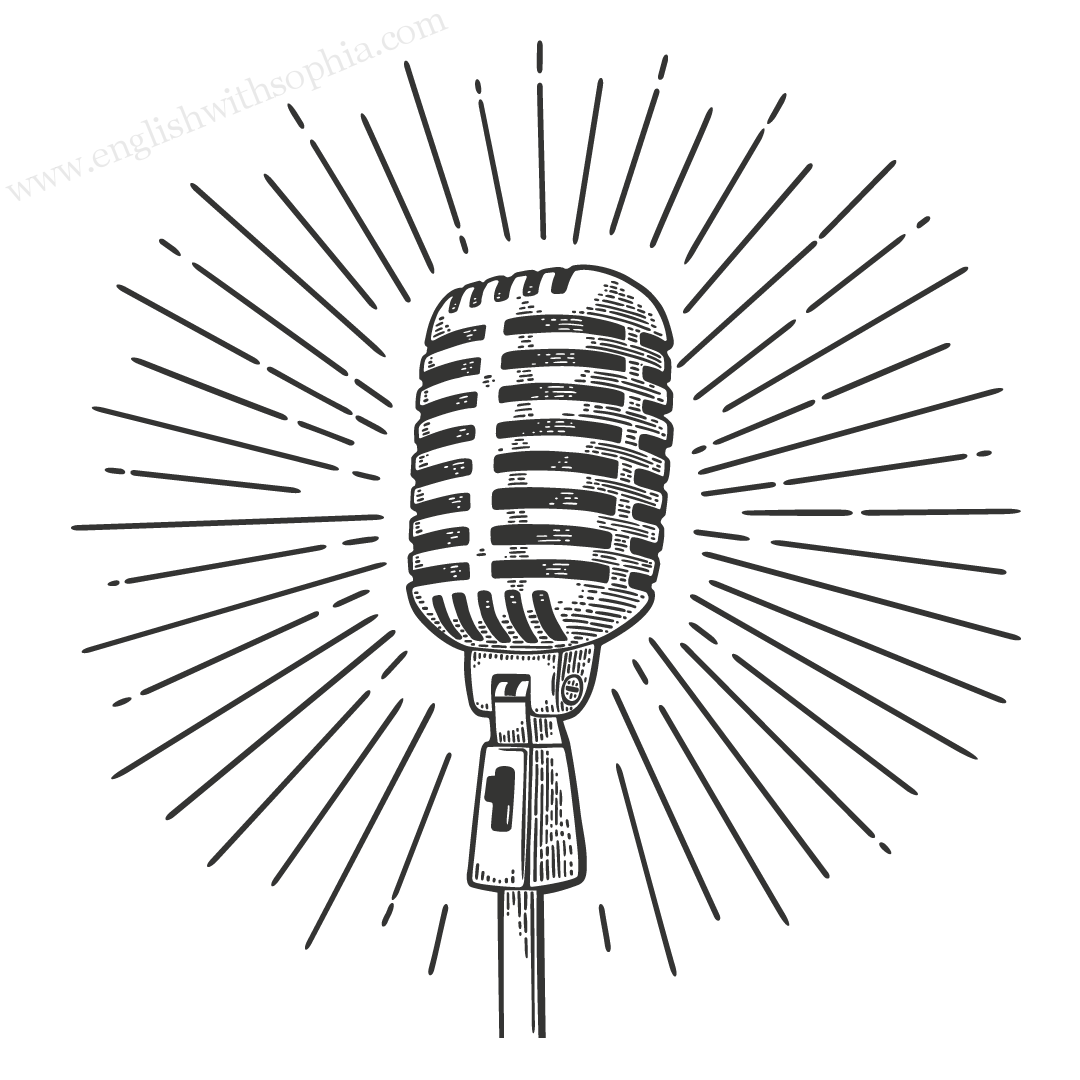 To boost your pronunciation, read and listen to William Carlos Williams’ The Use of Force, a short story first published in 1938 that revolves around power and submission.

Boosting Your Pronunciation: The Use of Force

They were new patients to me, all I had was the name, Olson. Please come down as soon as you can, my daughter is very sick.

When I arrived I was met by the mother, a big startled looking woman, very clean and apologetic who merely said, Is this the doctor? and let me in. In the back, she added. You must excuse us, doctor, we have her in the kitchen where it is warm. It is very damp here sometimes.

The child was fully dressed and sitting on her father’s lap near the kitchen table. He tried to get up, but I motioned for him not to bother, took off my overcoat and started to look things over. I could see that they were all very nervous, eyeing me up and down distrustfully. As often, in such cases, they weren’t telling me more than they had to, it was up to me to tell them; that’s why they were spending three dollars on me.

The child was fairly eating me up with her cold, steady eyes, and no expression to her face whatever. She did not move and seemed, inwardly, quiet; an unusually attractive little thing, and as strong as a heifer in appearance. But her face was flushed, she was breathing rapidly, and I realized that she had a high fever. She had magnificent blonde hair, in profusion. One of those picture children often reproduced in advertising leaflets and the photogravure sections of the Sunday papers.

She’s had a fever for three days, began the father and we don’t know what it comes from. My wife has given her things, you know, like people do, but it don’t do no good. And there’s been a lot of sickness around. So we tho’t you’d better look her over and tell us what is the matter. As doctors often do I took a trial shot at it as a point of departure. Has she had a sore throat? Both parents answered me together, No . . . No, she says her throat don’t hurt her.

Does your throat hurt you? added the mother to the child. But the little girl’s expression didn’t change nor did she move her eyes from my face. Have you looked? I tried to, said the mother, but I couldn’t see. As it happens we had been having a number of cases of diphtheria in the school to which this child went during that month and we were all, quite apparently, thinking of that, though no one had as yet spoken of the thing.

Well, I said, suppose we take a look at the throat first. I smiled in my best professional manner and asking for the child’s first name I said, come on, Mathilda, open your mouth and let’s take a look at your throat. Nothing doing. Aw, come on, I coaxed, just open your mouth wide and let me take a look. Look, I said opening both hands wide, I haven’t anything in my hands. Just open up and let me see. Such a nice man, put in the mother. Look how kind he is to you. Come on, do what he tells you to. He won’t hurt you. At that I ground my teeth in disgust. If only they wouldn’t use the word “hurt” I might be able to get somewhere.

But I did not allow myself to be hurried or disturbed but speaking quietly and slowly I approached the child again. As I moved my chair a little nearer suddenly with one catlike movement both her hands clawed instinctively for my eyes and she almost reached them too. In fact she knocked my glasses flying and they fell, though unbroken, several feet away from me on the kitchen floor. Both the mother and father almost turned themselves inside out in embarrassment and apology.

You bad girl, said the mother, taking her and shaking her by one arm. Look what you’ve done. The nice man . . . For heaven’s sake, I broke in. Don’t call me a nice man to her. I’m here to look at her throat on the chance that she might have diphtheria and possibly die of it. But that’s nothing to her. Look here, I said to the child, we’re going to look at your throat. You’re old enough to understand what I’m saying. Will you open it now by yourself or shall we have to open it for you? Not a move. Even her expression hadn’t changed. Her breaths however were coming faster and faster. Then the battle began. I had to do it.

I had to have a throat culture for her own protection. But first I told the parents that it was entirely up to them. I explained the danger but said that I would not insist on a throat examination so long as they would take the responsibility. If you don’t do what the doctor says you’ll have to go to the hospital, the mother admonished her severely. Oh yeah? I had to smile to myself.

After all, I had already fallen in love with the savage brat, the parents were contemptible to me. In the ensuing struggle they grew more and more abject, crushed, exhausted while she surely rose to magnificent heights of insane fury of effort bred of her terror of me.

The father tried his best, and he was a big man but the fact that she was his daughter, his shame at her behavior and his dread of hurting her made him release her just at the critical times when I had almost achieved success, till I wanted to kill him. But his dread also that she might have diphtheria made him tell me to go on, go on though he himself was almost fainting, while the mother moved back and forth behind us raising and lowering her hands in an agony of apprehension. Put her in front of you on your lap, I ordered, and hold both her wrists. But as soon as he did the child let out a scream. Don’t, you’re hurting me. Let go of my hands. Let them go I tell you.

Then she shrieked terrifyingly, hysterically. Stop it! Stop it! You’re killing me! Do you think she can stand it, doctor! said the mother. You get out, said the husband to his wife. Do you want her to die of diphtheria? Come on now, hold her, I said. Then I grasped the child’s head with my left hand and tried to get the wooden tongue depressor between her teeth. She fought, with clenched teeth, desperately!

But now I also had grown furious–at a child. I tried to hold myself down but I couldn’t. I know how to expose a throat for inspection. And I did my best. When finally I got the wooden spatula behind the last teeth and just the point of it into the mouth cavity, she opened up for an instant but before I could see anything she came down again and gripping the wooden blade between her molars she reduced it to splinters before I could get it out again.

Aren’t you ashamed, the mother yelled at her. Aren’t you ashamed to act like that in front of the doctor? Get me a smooth-handled spoon of some sort, I told the mother. We’re going through with this. The child’s mouth was already bleeding. Her tongue was cut and she was screaming in wild hysterical shrieks. Perhaps I should have desisted and come back in an hour or more. No doubt it would have been better.

But I have seen at least two children lying dead in bed of neglect in such cases, and feeling that I must get a diagnosis now or never I went at it again. But the worst of it was that I too had got beyond reason. I could have torn the child apart in my own fury and enjoyed it. It was a pleasure to attack her. My face was burning with it. The damned little brat must be protected against her own idiocy, one says to one’s self at such times. Others must be protected against her. It is a social necessity. And all these things are true.

But a blind fury, a feeling of adult shame, bred of a longing for muscular release are the operatives. One goes on to the end. In a final unreasoning assault I overpowered the child’s neck and jaws. I forced the heavy silver spoon back of her teeth and down her throat till she gagged. And there it was–both tonsils covered with membrane. She had fought valiantly to keep me from knowing her secret. She had been hiding that sore throat for three days at least and lying to her parents in order to escape just such an outcome as this.

Now truly she was furious. She had been on the defensive before but now she attacked. Tried to get off her father’s lap and fly at me while tears of defeat blinded her eyes.

I hope you have enjoyed yourself with this thought-provoking short story! Go on learning about the Use of English and about passing your First Certificate Exam with flying colors!