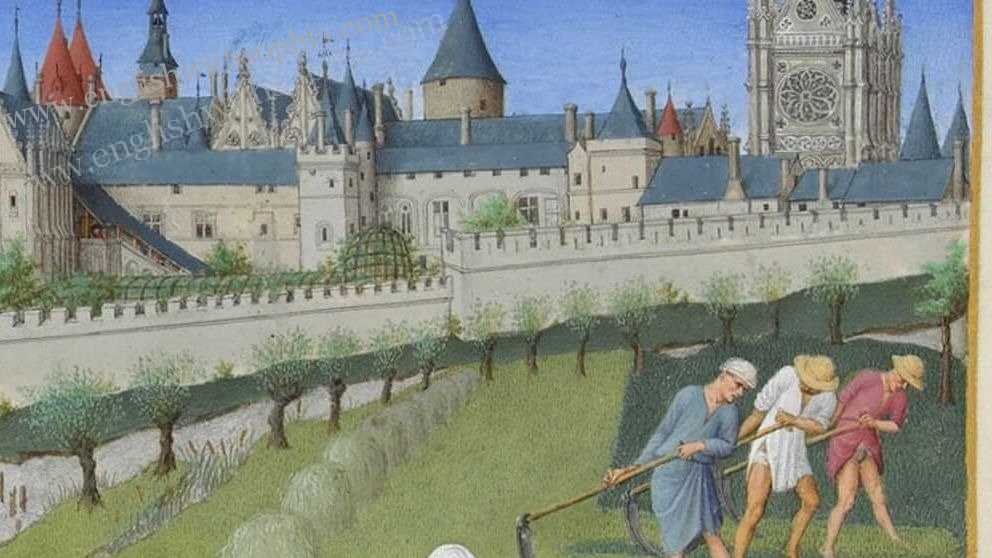 Deep diving into the Middle Ages and Castles

The gradual decline of the Roman Empire ushered in an era of European history called the Middle Ages, or the medieval period. It spanned the years from about 500 to 1500. During these centuries, a new society slowly emerged. It had roots in:

(1) the classical heritage of Rome

(2) the beliefs of the Roman Catholic Church

(3) the customs of various Germanic tribes.

What effects had the invasions of Western Europe?

In the fifth century, Germanic invaders overran the western half of the Roman Empire. Repeated invasions and constant warfare caused a series of changes that altered the economy, government, and culture:

• Downfall of Cities: With the fall of the Roman Empire, cities were abandoned as centers of administration.

• Population Shifts: As Roman centers of trade and government collapsed, nobles retreated to the rural areas. Roman cities were left without strong leadership. Other city dwellers also fled to the countryside, where they grew their own food. The population of western Europe became mostly rural.

Why did learning decline?

The Germanic invaders who stormed Rome could not read or write. Among Romans themselves, the level of learning sank sharply as more and more families left for rural areas. Few people except priests and other church officials were literate. Knowledge of Greek, long important in Roman culture, was almost lost. Few people could read Greek works of literature, science, and philosophy. The Germanic tribes, though, had a rich oral tradition of songs and legends. But they had no written language.

As German-speaking peoples mixed with the Roman population, Latin changed, and the common language was lost. While it was still an official language, it was no longer understood. Different dialects developed as new words and phrases became part of everyday speech. By the 800s, French, Spanish, and other Roman-based languages had evolved from Latin. The development of various languages mirrored the continued breakup of a once-unified empire.

How did Germanic kingdoms emerge?

In the years of upheaval between 400 and 600, small Germanic kingdoms replaced Roman provinces. The borders of those kingdoms changed constantly with the fortunes of war. But the Church as an institution survived the fall of the Roman Empire. During this time of political chaos, the Church provided order and security.

Along with shifting boundaries, the entire concept of government changed. Loyalty to public government and written law had unified Roman society. Family ties and personal loyalty, rather than citizenship in a public state, held Germanic society together. Unlike Romans, Germanic peoples lived in small communities that were governed by unwritten rules and traditions.

Every Germanic chief led a band of warriors who had pledged their loyalty to him. In peacetime, these followers lived in their lord’s hall. He gave them food, weapons, and treasure. In battle, warriors fought to the death at their lord’s side. They considered it a disgrace to outlive him. But Germanic warriors felt no obligation to obey a king they did not even know. Nor would they obey an official sent to collect taxes or administer justice in the name of an emperor they had never met.

The Germanic stress on personal ties made it impossible to establish an orderly government for large territories.

Why did Germans adopt Christianity?

Politics played a key role in spreading Christianity. By 600, the Church had converted many Germanic peoples. These new converts had settled in Rome’s former lands. Missionaries also spread Christianity. These religious travelers often risked their lives to bring religious beliefs to other lands.

During the 300s and 400s, they worked among the Germanic and Celtic groups that bordered the Roman Empire. In southern Europe, the fear of coastal attacks by Muslims also spurred many people to become Christians in the 600s.

How did monasteries, convents, and manuscripts appear?

To adapt to rural conditions, the Church built religious communities called monasteries. There, Christian men called monks gave up their private possessions and devoted their lives to serving God. Women who followed this way of life were called nuns and lived in convents.

Around 520, an Italian monk named Benedict began writing a book describing a strict yet practical set of rules for monasteries. Benedict’s sister, Scholastica, headed a convent and adapted the same rules for women.

These guidelines became a model for many other religious communities in western Europe. Monks and nuns devoted their lives to prayer and good works.

In the 600s and 700s, monks made beautiful copies of religious writings, decorated with ornate letters and brilliant pictures. These illuminated manuscripts preserved at least part of Rome’s intellectual heritage.

So, after the Roman Empire dissolved, small kingdoms sprang up all over Europe. For example, England splintered into seven tiny kingdoms. The Franks controlled the largest and strongest of Europe’s kingdoms, the area that was formerly the Roman province of Gaul.

In 771, Charles, who was known as Charlemagne, or Charles the Great, ruled the kingdom. An imposing figure, he stood six feet four inches tall, Charlemagne extended Frankish Rule and built an empire greater than any known since ancient Rome.

Each summer he led his armies against enemies that surrounded his kingdom. He fought Muslims in Spain and tribes from other Germanic kingdoms. He conquered new lands to both the south and the east. Through these conquests, Charlemagne spread Christianity.

He reunited western Europe for the first time since the Roman Empire. By 800, Charlemagne’s empire was larger than the Byzantine Empire. He had become the most powerful king in Western Europe.

In 800, Charlemagne traveled to Rome to crush an unruly mob that had attacked the pope. In gratitude, Pope Leo III crowned him emperor. The coronation was historic. A pope had claimed the political right to confer the title “Roman Emperor” on a European king. This event signaled the joining of Germanic power, the Church, and the heritage of the Roman Empire.

Charlemagne strengthened his royal power by limiting the authority of the nobles. To govern his empire, he sent out royal agents. They made sure that the powerful landholders, called counts, governed their counties justly.

Charlemagne regularly visited every part of his kingdom. He also kept a close watch on the management of his huge estates—the source of Carolingian wealth and power.

One of his greatest accomplishments was the encouragement of learning. He surrounded himself with English, German, Italian, and Spanish scholars. For his many sons and daughters and other children at the court, Charlemagne opened a palace school. He also ordered monasteries to open schools to train future monks and priests.

Who were Charlemagne’s heirs?

A year before Charlemagne died in 814, he crowned his only surviving son, Louis the Pious, as emperor. Louis was a devoutly religious man but an ineffective ruler. He left three sons: Lothair, Charles the Bald, and Louis the German. They fought one another for control of the Empire. In 843, the brothers signed the Treaty of Verdun, dividing the empire into three kingdoms.

As a result, Carolingian kings lost power and central authority broke down. The lack of strong rulers led to a new system of governing and landholding: feudalism.

How did Feudalism structure society?

The feudal system was based on rights and obligations. In exchange for military protection and other services, a lord, or landowner, granted land called a fief. The person receiving a fief was called a vassal. Feudalism depended on the control of the land.

The structure of feudal society was much like a pyramid. At the peak reigned the king. Next came the most powerful vassals—wealthy landowners such as nobles and bishops. Serving beneath these vassals were knights. Knights were mounted horsemen who pledged to defend their lords’ lands in exchange for fiefs. At the base of the pyramid were landless peasants who toiled in the fields.

In the feudal system, a status determined a person’s prestige and power. Medieval writers classified people into three groups: those who fought (nobles and knights), those who prayed (men and women of the Church), and those who worked (the peasants). Social class was usually inherited.

In Europe in the Middle Ages, the vast majority of people were peasants. Most peasants were serfs. Serfs were people who could not lawfully leave the place where they were born. Though bound to the land, serfs were not slaves. Their lords could not sell or buy them. But what their labor produced belonged to the lord.

What were the Manors?

The manor was the lord’s estate. During the Middle Ages, the manor system was the basic economic arrangement. The manor system rested on a set of rights and obligations between a lord and his serfs. The lord provided the serfs with housing, farmland, and protection from bandits. In return, serfs tended the lord’s lands, cared for his animals, and performed other tasks to maintain the estate.

Peasant women shared in the farm work with their husbands. All peasants, whether free or serf, owed the lord certain duties. These included at least a few days of labor each week and a certain portion of their grain.

It was a self-contained world. Peasants rarely traveled more than 25 miles from their own manor. By standing in the center of a plowed field, they could see their entire world at a glance. A manor usually covered only a few square miles of land. It typically consisted of the lord’s manor house, a church, and workshops. Generally, 15 to 30 families lived in the village on a manor. Fields, pastures, and woodlands surrounded the village. Sometimes a stream wound through the manor. Streams and ponds provided fish, which served as an important source of food. The mill for grinding the grain was often located on the stream.

The manor was largely a self-sufficient community. The serfs and peasants raised or produced nearly everything that they and their lord needed for daily life— crops, milk and cheese, fuel, cloth, leather goods, and lumber. The only outside purchases were salt, iron, and a few unusual objects such as millstones. These were huge stones used to grind flour. Crops grown on the manor usually included grains, such as wheat, rye, barley, and oats, and vegetables, such as peas, beans, onions, and beets.

Why was Manor life?

For the privilege of living on the lord’s land, peasants paid a high price. They paid a tax on the all-grain ground in the lord’s mill. Any attempt to avoid taxes by baking bread elsewhere was treated as a crime. Peasants also paid a tax on marriage. Weddings could take place only with the lord’s consent. After all these payments to the lord, peasant families owed the village priest a tithe or church tax. A tithe represented one-tenth of their income.

Serfs lived in crowded cottages, close to their neighbors. The cottages had only one or two rooms. If there were two rooms, the main room was used for cooking, eating, and household activities. The second was the family bedroom.

Peasants warmed their dirt-floor houses by bringing pigs inside. At night, the family huddled on a pile of straw that often crawled with insects. Peasants’ simple diet consisted mainly of vegetables, coarse brown bread, grain, cheese, and soup.

For most serfs, both men and women, life was work and more work. Their days revolved around raising crops and livestock and taking care of home and family. As soon as children were old enough, they were put to work in the fields or in the home.

Many children did not survive to adulthood. Illness and malnutrition were constant afflictions for medieval peasants. The average life expectancy was about 35 years. And during that short lifetime, most peasants never traveled more than 25 miles from their homes.

Yet, despite the hardships they endured, serfs accepted their lot in life as part of the Church’s teachings. They, like most Christians during medieval times, believed that God determined a person’s place in society.

If you want to go on learning about castles, check Castle and Siege Weapons Poster!