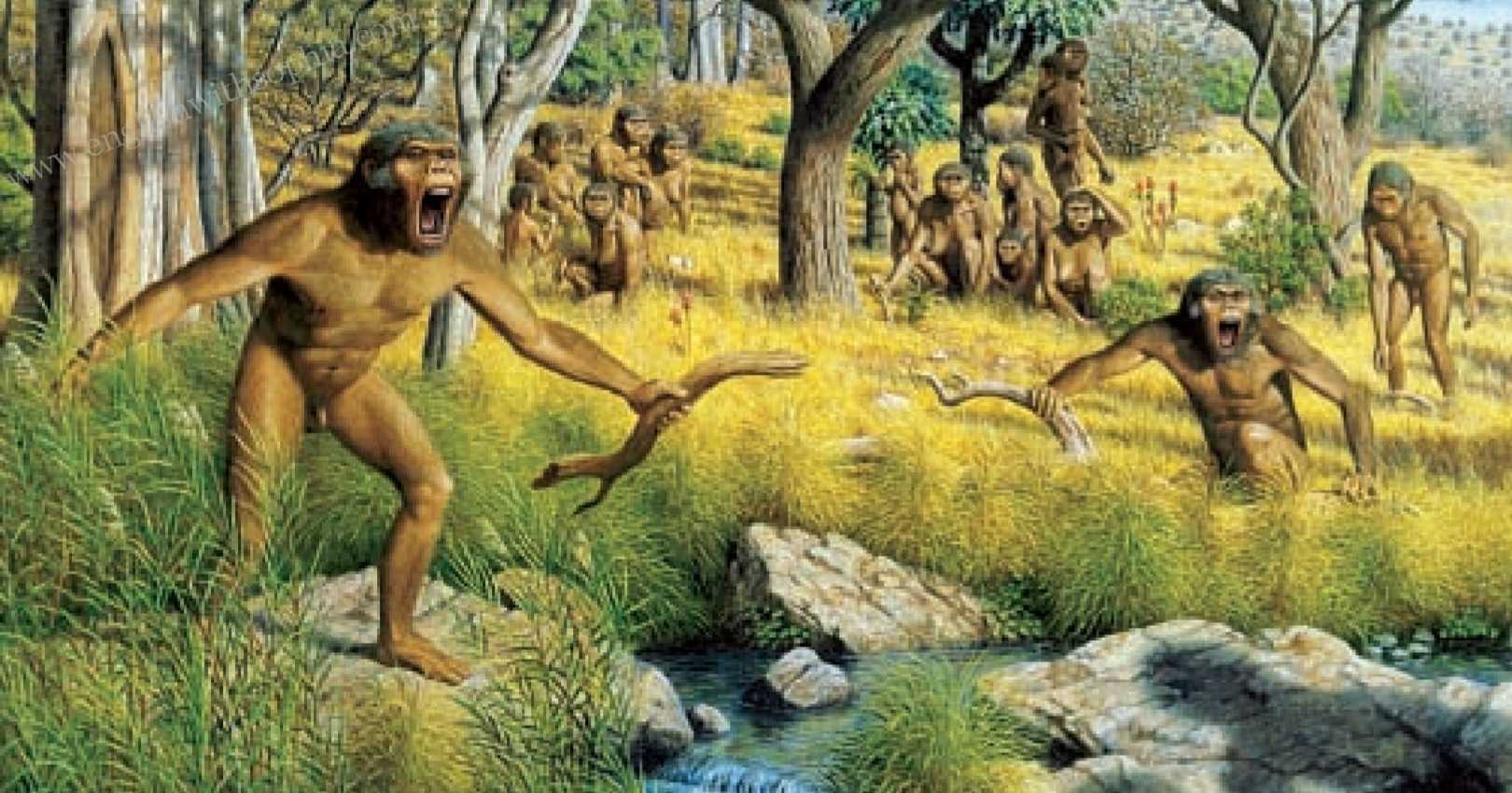 Written documents provide a window to the distant past. For several thousand years, people have recorded information about their beliefs, activities, and important events. Prehistory, however, dates back to the time before the invention of writing—roughly 5,000 years ago. Without access to written records, scientists investigating the lives of prehistoric peoples face special challenges.

Archaeologists are specially trained scientists who work like detectives to uncover the story of prehistoric peoples. They learn about early people by excavating and studying the traces of early settlements. An excavated site, called an archaeological dig, provides one of the richest sources of clues to the prehistoric way of life. Archaeologists sift through the dirt in a small plot of land.

They analyze all existing evidence, such as bones and artifacts. Bones might reveal what the people looked like, how tall they were, the types of food they ate, diseases they may have had, and how long they lived. Artifacts are human-made objects, such as tools and jewelry. These items might hint at how people dressed, what work they did, or how they worshiped.

Scientists called anthropologists study culture, or a people’s unique way of life. Anthropologists examine the artifacts at archaeological digs. From these, they re-create a picture of early people’s cultural behavior.

How were early footprints found?

In the 1970s, archaeologist Mary Leakey led a scientific expedition to the region of Laetoli in Tanzania in East Africa. There, she and her team looked for clues about human origins. In 1978, they found prehistoric footprints that resembled those of modern humans preserved in volcanic ash. These footprints were made by humanlike beings now called australopithecines. Humans and other creatures that walk upright, such as australopithecines, are called hominids. The Laetoli footprints provided striking evidence about human origins.

While Mary Leakey was working in East Africa, U.S. anthropologist Donald Johanson and his team were also searching for fossils. They were exploring sites in Ethiopia, about 1,000 miles to the north. In 1974, Johanson’s team made a remarkable find—an unusually complete skeleton of an adult female hominid. They nicknamed her “Lucy” after the song “Lucy in the Sky with Diamonds.” She had lived around 3.5 million years ago—the oldest hominid found to that date.

Lucy and the hominids who left their footprints in East Africa were species of australopithecines. Walking upright helped them travel distances more easily. They were also able to spot threatening animals and carry food and children.

These early hominids had already developed the opposable thumb. This means that the tip of the thumb can cross the palm of the hand. The opposable thumb was crucial for tasks such as picking up small objects and making tools.

When did the Old Stone Age begin?

The invention of tools, mastery over fire, and the development of language are some of the most impressive achievements in human history. Scientists believe these occurred during the prehistoric period known as the Stone Age. It spanned a vast length of time.

The earlier and longer part of the Stone Age, called the Old Stone Age or Paleolithic Age, lasted from about 2.5 million to 8000 B.C. The oldest stone chopping tools date back to this era.

The New Stone Age, or Neolithic Age, began about 8000 B.C. and ended as early as 3000 B.C. in some areas. People who lived during this second phase of the Stone Age learned to polish stone tools, make pottery, grow crops, and raise animals.

Much of the Paleolithic Age occurred during the period in the earth’s history known as the Ice Age. During this time, glaciers alternately advanced and retreated as many as 18 times. The last of these ice ages ended about 10,000 years ago. By the beginning of the Neolithic Age, glaciers had retreated to roughly the same area they now occupy.

Before the australopithecines eventually vanished, new hominids appeared in East Africa around 2.5 million years ago. In 1960, archaeologists Louis and Mary Leakey discovered a hominid fossil at Olduvai Gorge in northern Tanzania. The Leakeys named the fossil Homo habilis, which means “man of skill.” The Leakeys and other researchers found tools made of lava rock. They believed Homo habilis used these tools to cut meat and crack open bones. Tools made the task of survival easier.

How did homo erectus develop?

About 1.6 million years ago, before Homo habilis left the scene, another species of hominids appeared in East Africa. This species is now known as Homo erectus, or “upright man.” Some anthropologists believe Homo erectus was a more intelligent and adaptable species than Homo habilis. Homo erectus people used intelligence to develop technology—ways of applying knowledge, tools, and inventions to meet their needs.

According to anthropologists, Homo erectus was the first to use fire. Fire provided warmth in cold climates, cooked food, and frightened away attacking animals. The control of fire also probably helped Homo erectus settle new lands. Homo erectus may have developed the beginnings of spoken language.

Language, like technology, probably gave Homo erectus greater control over the environment and boosted chances for survival. The teamwork needed to plan hunts and cooperate in other tasks probably relied on language. Homo erectus might have named objects, places, animals, and plants and exchanged ideas.

When did “the Dawn of Modern Humans” take place?

Scientists have traditionally classified Neanderthals and Cro-Magnons as early groups of Homo sapiens. However, in 1997, DNA tests on a Neanderthal skeleton indicated that Neanderthals were not ancestors of modern humans. They were, however, affected by the arrival of Cro-Magnons, who may have competed with Neanderthals for land and food.

How was Neanderthals’ way of life?

In 1856, as quarry workers were digging for limestone in the Neander Valley in Germany, they spotted fossilized bone fragments. These were the remains of Neanderthals, whose bones were discovered elsewhere in Europe and Southwest Asia. These people were powerfully built. They had heavily slanted brows, well-developed muscles, and thick bones.

To many people, the name “Neanderthal” calls up the comic-strip image of a club-carrying caveman. However, archaeological discoveries reveal a more realistic picture of these early hominids, who lived between 200,000 and 30,000 years ago.

Evidence suggests that Neanderthals tried to explain and control their world. They developed religious beliefs and performed rituals. About 60,000 years ago, Neanderthals held a funeral for a man in Shanidar Cave, located in northeastern Iraq. Some archaeologists theorize that during the funeral, the Neanderthal’s family covered his body with flowers. This funeral points to a belief in a world beyond the grave.

Neanderthals were also resourceful. They survived harsh Ice Age winters by living in caves or temporary shelters made of wood and animal skins. Animal bones found with Neanderthal fossils indicate the ability of Neanderthals to hunt in subarctic regions of Europe. To cut up and skin their prey, they fashioned stone blades, scrapers, and other tools.

The Neanderthals survived for some 170,000 years and then mysteriously vanished about 30,000 years ago.

When did Cro-Magnons emerge?

About 40,000 years ago, a group of prehistoric humans called Cro-Magnons appeared. Their skeletal remains show that they are identical to modern humans. The remains also indicate that they were probably strong and generally about five-and-one-half feet tall. Cro-Magnons migrated from North Africa to Europe and Asia.

Cro-Magnons made many new tools with specialized uses. Unlike Neanderthals, they planned their hunts. They studied animals’ habits and stalked their prey. Evidently, Cro-Magnons’ superior hunting strategies allowed them to survive more easily. This may have caused Cro-Magnon populations to grow at a slightly faster rate and eventually replace the Neanderthals. Cro-Magnons’ advanced skill in spoken language may also have helped them to plan more difficult projects. This cooperation perhaps gave them an edge over the Neanderthals.

Scientists are continuing to work at numerous sites in Africa. Their discoveries change our views of the still sketchy picture of human origins in Africa and of the migration of early humans out of Africa.

Newly discovered fossils in Chad and Kenya, dating between 6 and 7 million years old, have some apelike features but also some that resemble hominids. The study of these fossils continues, but evidence suggests that they may be the earliest hominids. A 2.33-million-year- old jaw from Ethiopia is the oldest fossil belonging to the line leading to humans. Stone tools found at the same site suggest that toolmaking may have begun earlier than previously thought.

New discoveries also add to what we already know about prehistoric peoples. For example, in 1996, a team of researchers from Canada and the United States, including a high school student from New York, discovered a Neanderthal bone flute 43,000 to 82,000 years old. This discovery hints at a previously unknown talent of the Neanderthals—the gift of musical expression. The finding on cave walls of drawings of animals and people dating back as early as 35,000 years ago gives information on the daily activities and perhaps even religious practices of these peoples.

Early humans’ skills and tools for surviving and adapting to the environment became more sophisticated as time passed.

Find out more about the Stone Age