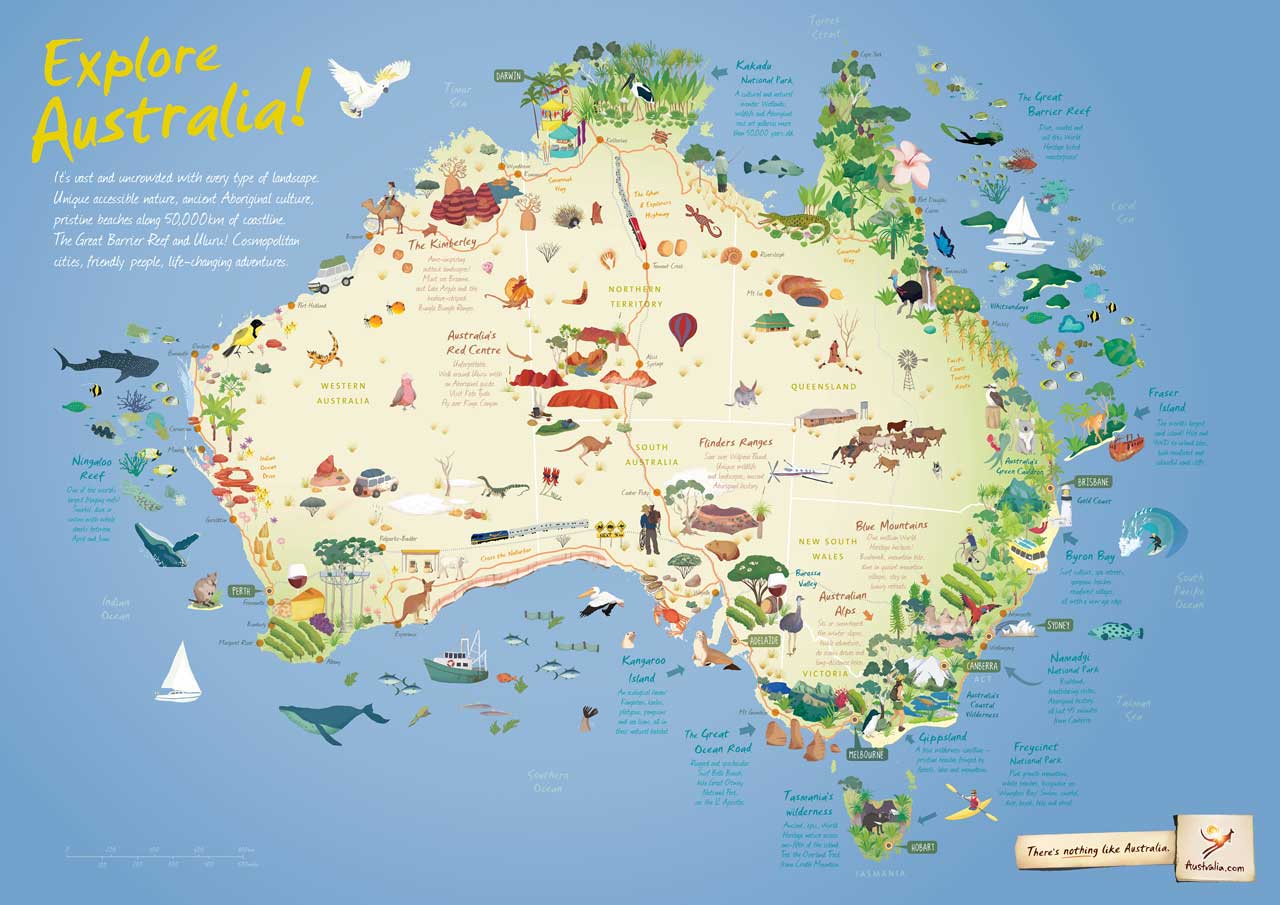 Exciting Facts: What do you know about Australia?

Hi guys! Want to know some exciting facts about Australia? Australia is the only country in the world that covers an entire continent. It is one of the largest countries on Earth. Actually, what do you know about this continent, country and island? In fact it’s the world’s biggest island but the world’s smallest continent! Discover all the amazing and interesting things Australia has to offer with these exciting facts.

Australia is the only country in the world that covers an entire continent. It is one of the largest countries on Earth. Although it is rich in natural resources and has a lot of fertile land, more than one-third of Australia is desert.

Firstly, most Australian cities and farms are located in the southwest and southeast, where the climate is more comfortable. There are dense rain forests in the northeast. The famous outback (remote rural areas) contains the country’s largest deserts, where there are scorching temperatures, little water, and almost no vegetation.

Secondly, running around the eastern and southeastern edge of Australia is the Great Dividing Range. This 2,300-mile (3,700-kilometer) stretch of mountain sends water down into Australia’s most important rivers and the Great Artesian Basin, the largest groundwater source in the world.

Australia is one of the world’s most ethnically diverse nations and that is why nearly a quarter of the people who live in Australia were born in other countries. They come from the United Kingdom and other European countries, but also from China, Vietnam, North Africa, and the Middle East.

Australia’s warm, sunny climate and abundance of open spaces gives the population a love of the outdoors. The people are also passionate about sports, including swimming, surfing, sailing, tennis, soccer, cricket, rugby, and their own invention, Australian rules football.

Australia’s ecosystem is an unusual one because of its remote location. As a result, there are many animal species that occur here and nowhere else in the world, such as the platypus, kangaroo, echidna, and koala. Australia has 516 national parks to protect its unique plants and animals.

One of Australia’s most amazing sites rises like an enormous whale’s back from a flat red-soil desert called the Red Center. This site is called Uluru, and it is a sacred natural formation at the heart of the country. In other words, rising 1,100 feet (335 meters) tall, it is the largest rock in the world!

Australia is home to many of the deadliest species of animals on the planet. There are 36 species of poisonous funnel-web spiders in eastern Australia. You will also find also 20 types of venomous snakes, including the taipan, which attacks without warning and bites repeatedly, killing its victim in minutes.

As a commonwealth of the United Kingdom, Australia’s head of state is the British monarch, but many Australians think the country should end its ties to Britain and become a republic. In a vote in 1999, Australians decided against separating from the UK, but the vote was close, and the debate continues.

Australia is an important exporter of agricultural goods like wool, wheat, beef, fruit, and wine. Similarly, the country is also rich in minerals and metals and is the world’s fourth largest producer of gold.

Aboriginal people arrived in Australia about 50,000 years ago. They may have traveled from Asia across land bridges that were exposed when sea levels were lower. The hardy Aborigines have learned to live in the harsh conditions of the outback.

Dutch explorers first landed in Australia in 1606, and years later the British began to settle there in 1788. Many settlers were criminals sent to live in Australia as punishment. For a short time, the newcomers lived peacefully with the Aboriginal people. But soon, fighting broke out over who owned the land.

In 1851, gold was discovered in Australia. A rush to find riches brought thousands of new immigrants, and by 1859, six separate colonies existed. In 1901, these colonies joined to form a British commonwealth.

Melbourne has been known by many names. From it’s earliest beginnings as Naarm to the local Aboriginal tribes, through to Batmania, Smellbourne and later Marvellous Melbourne. Join your host to learn about the fascinating history of the city and how it has transformed over the years. You will visit some of the most beautiful streets of the city known locally as the “Paris end” to small, dim laneways (alleys) filled with hidden restaurants and bars.